It is sadly our final day at Anjajavy but it was no less epic.

The best part of the day was a three hour boat tour to Moramba bay. We had a false start in the morning where the boat we were supposed to go on broke down. However, this turned out to be yet another lucky break (we have had such luck this trip!) and we got to use the OTHER boat which was awesome. “Talio” is brand new and super fancy and comfortable.

Everyone is talking about how I hooked Christian in the heart yesterday. Cedric said that “we” (the staff? His family?) have been talking about this incident – they think it is symbolic if not something more (is there something in Animism about something like this?). I said it could be symbolism or it could just be me being clumsy! There were some French people on our boat that had just arrived in the resort this morning and they had even heard about the incident and were making fun of me! 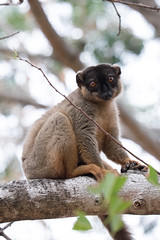 So cute! The common brown lemur. 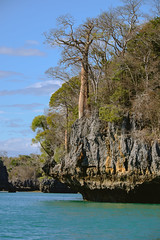 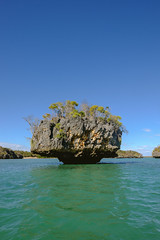 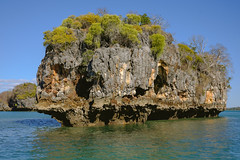 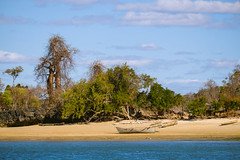 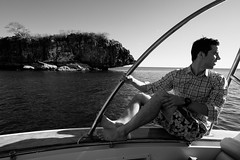 Barney, the scientific intern, on the boat ride to Moramba Bay. 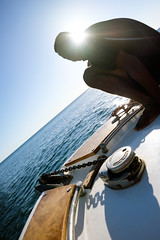 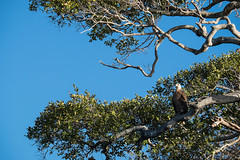 Fish eagle - one of the rarest birds in Madagascar. 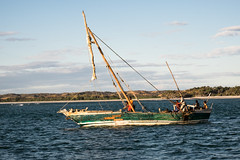 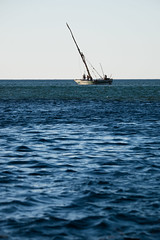 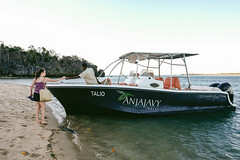 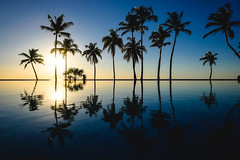 Sunset over the Anjajavy swimming pool 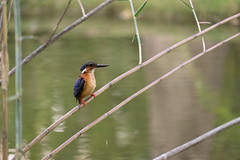 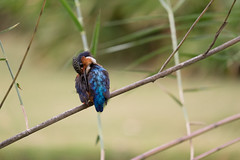 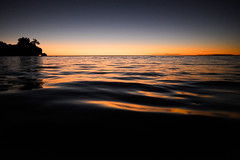 Swimming in the Channel of Mozambique every day at sunset. 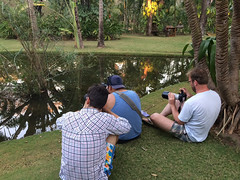 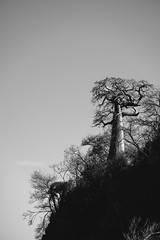 We had an interesting conversation on the boat in which I learned that Barney pays 9000 British pounds a year to go to Cambridge, which is the British equivalent of Harvard. This is maybe 12000 dollars at most? He said that the same degree at Harvard costs 91000 dollars a year!!!! And the program is not as good. Wow. We talked about how one of the many reasons involved in this complicated issue is the amount of money US universities spend on facilities. Barney said the facilities at Cambridge are old and not nice but the education is good and that’s what you are there for.

According to Tamara, a Dutch woman also honeymooning here, Moramba bay is the opening scene to the David Attenborough special about Madagascar. The landscape is pretty cool and according to Barney, unique to Madagascar. The islands there are formed by ancient coral (“tsingy”) turning into sharp rock. The bottoms get worn away by the sea so they look like they are suspended out of the water.

The first two sights were mushroom rock – basically a mushroom shaped island – and then right across from it on another island a spooky cave which contains the tomb of one of the kings of the Sakalava tribe. Tombs are important to the Malagasy and there was a zebu skull above this cave which signifies it is fado or taboo to visit the site. Not sure I would want to, this cave island combo commanded respect and had the desired effect on me.

We saw a bunch of wildlife including some dolphins playing, some cool birds called the African darters and the sacred ibis.

Also saw some overnight fishing encampments – Barney said they are like motels for the locals out working the ocean for the week then returning home. Right now is a full moon and I was told this is the time to stock up since the fishing is good.

On the way back we stopped for some brief snorkeling. The highlight for me was re-learning how to dive with the snorkel on so you could get closer to the coral and the fish.

Our final stop was the nest of the fish eagle, and we were in luck that one was home. He was posing in the afternoon sun, looking massive and regal.

We stopped by our last tea time at the oasis on the way back and Christian spotted a beautiful Malagasy kingfisher diving into the pond over and over. Pretty soon the bird had three photographers crowded around but did not give a damn.

We finished the day as normal, relaxing on the deck watching the sunset and then eating an over the top dinner at the lodge. This has been quite the experience, trying out the luxury resort vacation. I was definitely able to relax and enjoy my second week of marriage to Christian and unwind from the wedding prep which is what we were going for by choosing this spot. I think I was able to take in the luxury which I am somewhat uncomfortable with normally because a) we are outside in beautiful nature all the time and surrounded by actual wild wildlife, and b) there seems to be some greater goods beyond luxury that the resort is serving – building up the communities around it and restoring and preserving the nature reserve it is on. At the same time, there is something strange about enjoying so much luxury right next door to a village and within a country and world that has people and animals in it that are so poor they cannot provide for themselves even the basics sometimes.

We are going to miss this place and are also excited to move on to our tour!