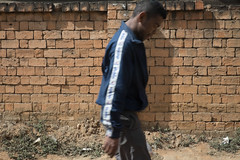 Street photo from the car - Tana 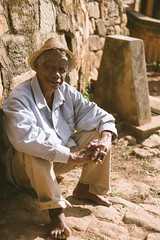 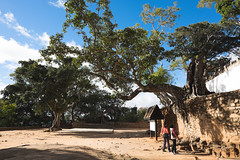 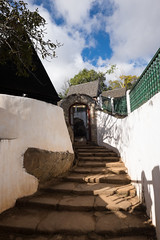 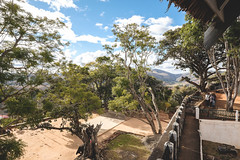 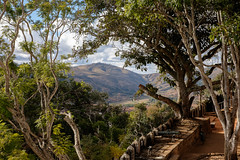 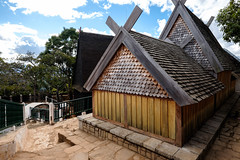 King A's house - no pics inside 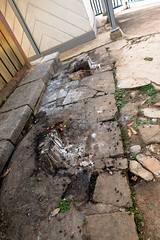 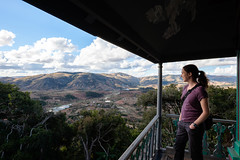 Laura taking in the view. 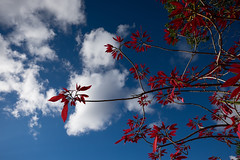 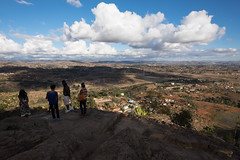 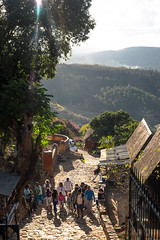 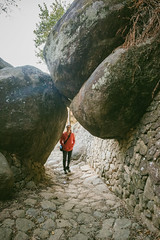 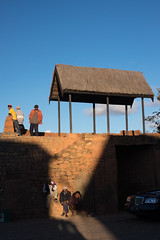 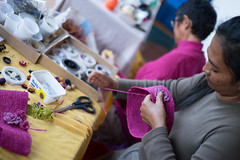 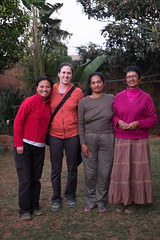 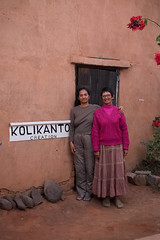 Christian and I squeezed every bit out of the two and a half hours between dawn and needing to leave to fly out of Anjajavy. We did a jog to a giant baobab we had not seen yet, took a quick dip in the ocean and had one last homemade yogurt and fresh squeezed OJ for breakfast. Was feeling really sad to leave such paradise!! So grateful that we were able to have this week there.

At the Anjajavy airstrip there was a tour group from the World Wildlife Federation coming to stay – the place was steadily filling up, but I am glad it is with fellow eco-minded folks.

On the plane I read some background on the Malagasy cultural and natural history from the guidebook that I hadn’t read yet. The most surprising tidbits were:

– As recently as 300 years ago, there was a flightless elephant bird that stood over 9 feet tall roamed Malagasy forests, but it was finally hunted to extinction

– Madagascar has been isolated from other landmasses for 65 million years, making it the oldest island in earth.

Back in Tana we were picked up by our tour company Za Tours again – Jackie was once again our guide.

We definitely landed back in the “real” Madagascar – one that is very much stricken with the ills of poverty, mismanagement by government and more issues. Tana is super polluted (Christian and I were feeling sick from the diesel fumes by the end of the day) and full of traffic all day long. We were in stop and go traffic almost the whole time. This is probably the poorest country we have been to.

On our drive we looked out the window at the streets teeming with people everywhere going about their day – carrying things, socializing, shopping, working. The shops reminded me of the ones we saw in SE Asia. Living in Portland, we are used to all these shops that are “in style”, taking the utmost care in beautifully displaying their wares. The shops here are much simpler, with just the items for sale distributed around a small shack. It is not as pretty but it still performs the same basic function.

We also passed many weddings. There are certain days that are considered lucky for different things in Madagascar. Saturdays are lucky for weddings. Jackie told us what many people have been telling us. That a traditional wedding blessing is for the couple to have 7 girls and 7 boys. Jackie says nowadays people don’t have money so they don’t wish that so much anymore.

We decided to go directly to our destination – Ambohimanga. On the way we stopped at Le Bivouac restaurant, owned by Jessica and her family, and had some delicious french food for lunch. I like the French food everywhere but it is super heavy – breads, creams, meats, sugar and not many veggies. In fact, when I asked, this restaurant did not have any vegetables at all!

Ambohimanga means the “blue hill”. Blue has the meaning of “good” in Madagascar. If you are a blue person you are a good person. “Black” things are not so good.

Ambohimanga is the historical house / palace of the king called – wait for it – Andrianampoinimerina (and that’s the short name!) and the kings and queens after him. It is a sacred place to the Malagasy and the Merina ethnic group especially and was not always open to Europeans.

It was recently designated a Unesco world heritage site because of its historical significance to the Malagasy but especially people still regularly come there to observe rituals and especially perform sacrifices! Almost everywhere we walked on the grounds Jackie pointed out spots where people performed and still perform sacrifices. In the king’s day zebu were used but nowadays most use a goose or a chicken because they do not have enough money to use a zebu. We saw a couple sites where they used some candy that was not cleaned up so there were many flies buzzing all around! There are some people from the neighboring islands – like Reunion for example – that have enough money to use a zebu, and there were some photos on a sign of a recent zebu sacrifice that these people performed. They eat the meat, but let the blood spill on the ground.

The site is park-like on top of a hill about 30 km from Tana. There is fresh air and it is a popular day excursion for the Malagasy. We saw families, school groups and clans of teenagers picnicking and hanging out. One thing I love is that many people in Madagascar like making music – quite a few carry around acoustic guitars and we heard a beautiful duet that a man and a woman were singing together off in the bushes.

In the entrance there were some huge ficus trees that have probably been there since the king’s time. Ficus are sacred to the Merina ethnic group – bet you did not know that about your house plant!

The coolest man made structure was King A’s one room wooden house. Reigning from 1787-1810 he was not westernized yet, and pictures of him show him in traditional dress (all the kings and queens after him were dressed like European monarchs).

We were told to enter right foot first. The room has all sorts of spears and cooking objects they used at the time.

The best was the bed situation. The room had a tall ceiling. The king slept on a bed about 9 feet off the ground. His wives slept on another bed nearer to the floor. The cooking area was near the kings bed. If someone wanted to visit the king, he would climb off his bed up a pole with steps, up to the top of the ceiling. His wife meanwhile would “cook” something that made a lot of smoke hiding the king at the top. The person wanting to see the king would enter and the king could get a look at who it was. If he wanted to see them he would throw small rocks onto his bed. His wife would say, “he’ll be right back”, the visitor would step out and he would climb down to see them. If he didn’t want to see them, no stones, and his wife would say, “he’s out” and the king would hide in his smoky spot until the visitor had left.

This trick, plus living up on a hill, plus living behind 12 gates – one of them we saw with a huge rock circle door that it took many men to move – managed to keep the king safe from murderers until he died.

There were a bunch of rulers after him including three queens. The queens built a European style house next door to King A’s house. It was very non Malagasy looking as it was filled with antiques sent from the other European monarchs as gifts at the time. The last queen and her husband the prime minister fought the French but lost. Madagascar became a French colony and the queen and prime minister were exiled to Algeria in 1896.

We walked around the gardens, taking in the view. I saw my first chameleon – definitely looking quite stick like blending into his tree! Also saw a beautiful “Madagascar tree”, so called because it is red white and green like the Madagascar flag. Bright red leaves, green stems, white sap.

On the way back we stopped at another women’s collective project that makes crafts for tourists. Their store is Kolikanto creations. Jessica from the restaurant was there again to translate for them! These women specialized in raffia – a palm that grows in Madagascar that they use to weave many different objects. Apparently the word raffia has entered the English language from Madagascar. It was beautiful stuff and we had a fun girly earring shopping session with all the ladies crowding around helping me pick out a pair.

We crawled through the Saturday evening karaoke crowds, diesel fumes, and traffic that stretched our trip from 30 mins to 1.5 hours back to the Pavillon hotel. We ordered takeout from a nearby restaurant which came served on trays with real plates, silverware and salt and pepper shakers. Then we collapsed into bed.