Woke up before dawn to go on a Birdwatching tour with Rado, a friendly and knowledgeable guide. He has been working at the hotel for 15 years, starting as an electrician, then a driver and for the last 6 years a guide.

We saw a lot of birds which I will list at the bottom plus a lot of fun other stuff:

– the hotel employees all doing their morning routines – the employees that board at the hotel run or walk along the same trail we were taking for exercise. Some were coming in from the village – the hotel brings them in on a big tractor. The hotel employs 130 people – 100 local, and 30 from big cities such as Tana and Mahajanga. We said the local greeting to everyone which is “salama”. This is because the local ethnic group, the Sakalava, was influenced by Arab traders and Islam – hence the similarity to the Arab greeting “salaam alechem”

– A farmer from a village 30 km away coming in on a two zebu cart filled to the brim with Palm leaves. Rado asked him if we could take his picture. He had started at 10 pm last night, and had only stopped for an hour or two to rest and let his zebu have grass! It will be worth it as his cart of Palm leaves will be sold to the hotel for 100,000 ariary or roughly $400. Rado says this is a weeks worth of work – cutting, drying, delivering. The hotel uses a lot of this material for its roofs which it replaces every 4 years.

– The tree that Anjajavy gets its name from. It’s the jajave tree – a type of mangrove. “An” at the beginning of the name means village.

– Our first close encounters with giant baobab trees. There are 8 species of baobab in the world and 6 are only found in Madagascar. They are sacred to Malagasy – they don’t cut them. We saw a 900 year old baobab tree today that was 9 meters around, and a couple of 400 year olds. They are kind of spongy in the middle apparently and a neighboring tamarind tree had grown into the trunk of one of them and they were happily coexisting that way.

– Sleeping lemurs! So cute. They find a tiny branch and curl up in a ball. The fossa cat (which likes to climb trees and eats one lemur or boa snake a day) can’t reach them as easily in the small branches.

– a fossa track! According to Rado they have 11 toes! Can that be true?? I could not see all of them in the sand but there did look like a lot.

– and of course the birds! Here is the bird list of birds we saw:

– Crested Djongo – the Malagasy consider him “the king of birds”. Makes cool sounds, is super smart, alerts other birds to danger

– Madagascar magpie robin – one fun thing is seeing the similarities between Malagasy and the American counterpart birds. The Malagasy robins hop around on the ground looking for worms just like the American robins do.

And this was all before breakfast! Fortunately for whoever may be actually reading this, we had a pretty uneventful day afterwards as Christian was feeling kind of sick and the weather was cooler and cloudy all day.

I went for a great run, doing a loop past the mangroves at low tide, seeing a small fishing village called Kinga from the opposite shore (some men were trying to fix a quite ancient looking sail boat), and along the trail near the five beaches. On beach number five I saw a fish eagle! Apparently these are quite rare. Cedric said that he does the same run a few times a week and has only seen one once. It has a beautiful white tail.

The other highlight of the day was that Cedric organized a little concert for the guests at sundown. He had a complimentary cocktail and delicious appetizers. But the coolest thing was that some of the staff members performed music and dancing from their ethnic group (tsiminety) which is different from the Anjajavy village group. So beautiful and different from any I have heard! The woman did some dances balancing a bottle on her head!

Cedric saw some of Christians photos and offered us a free boat excursion on Friday as payment for Christian’s photo of the golden brown mouse lemur!!! 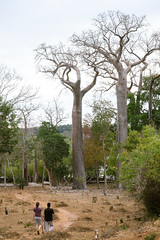 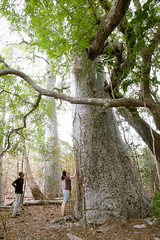 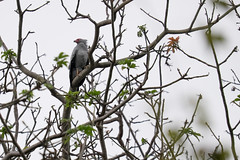 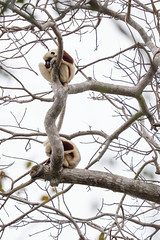 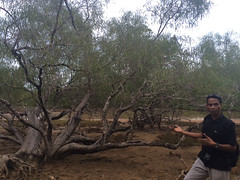 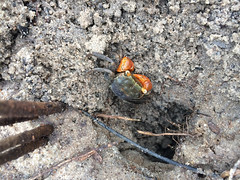 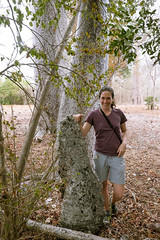 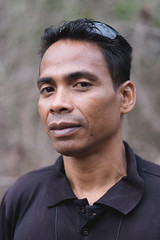 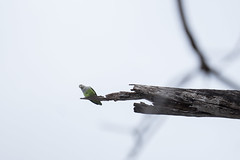 Grey-headed lovebird. A kind of parrot. 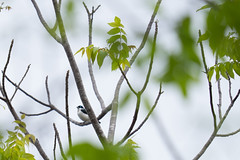 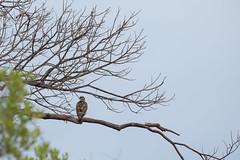 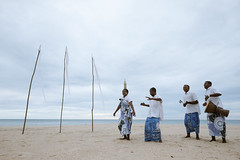 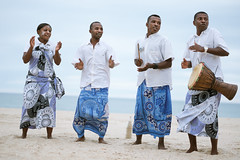 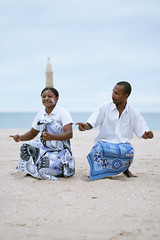 Bottle dance all the way to the floor. 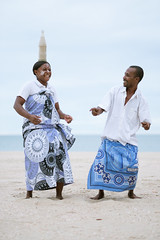 _DSF1A pair would break off from the group to do special dances.945 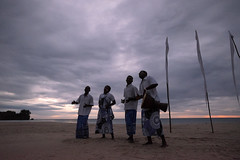 Singing in the cloudy sunset. 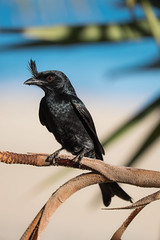 Crested Djongo - the king of birds!