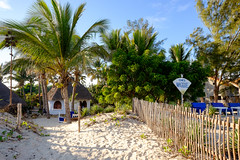 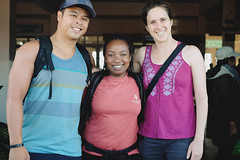 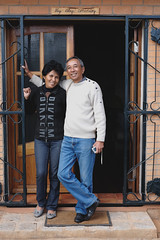 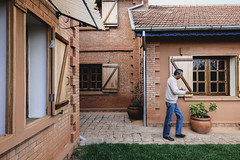 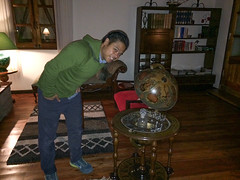 In the morning we took a quick peek at the beach and then continued our journey to check out the Eastern area of Madagascar where the rainforests are. Similar to Oregon, Madagascar has a mountainous area running down the middle which traps moisture from the Indian Ocean on the East side. The west, where we’ve been up until now stays dry (although there is a rainy season) and in the East, there is rain all year round, creating rainforests.

We said goodbye to Claudia and Rivu at the Morandava airport and flew Air Madagascar again to Tana. We had been hearing so many horror stories about Air Madagascar – how it’s a government owned monopoly and therefore poorly run, how it cancels and delays flights all the time messing up people’s travel plans,even that it is banned for safety reasons in Europe. I was kind of nervous to use them! But they have seemed pretty professional to me, down to the flight attendants using he internationally used double finger point and elbow flex to the door exits. No delayed flights so far. Just as they were about to be perfect, however, on our way out the gate to the plane, the smiling ticket checker took each of our tickets, took a sharpie and crossed out our seat assignments (which were next to each other) and said, “open seating!” For some unknown reason they didn’t want to use their seat assignments so it was a free for all finding our seats on the plane. We did not sit next to each other but we managed to live 😉

At the airport we met our new driver Barry and guide Faniry or Fan from Za Tours. Fan is 25 years old and has been a tour guide for 4 years. He grew up on a rice farm outside of Tana but when he was a teenager his family moved to the city. He seems like a typical 25 year old guy – on his time off he plays ping pong, playstation, and watches the NBA.

After running a couple of errands, we made our way to Antsirabe, the highest and coldest town in Madagascar.

On the way, the scenery was completely different than the west. The houses were red brick, and it is quite hilly so the rice and vegetable fields are all terraced. This region supplies much of the veggies for Tana. They don’t use chemicals in the agriculture (I am guessing they can’t afford it) and use zebu dung and the thatch off their old roofs for fertilizer. Their farms almost always look very neat and weed free to me from a distance.

We passed similar scenes as the west of subsistence village life. People doing laundry in the waterways (so hard to keep the dust off here!), about twenty chickens in baskets on top of a taxi brusse (how do they stay in there?). We saw a couple of boys on some homemade stilts – the country kids almost always have homemade toys it seems. We passed a town famous for making cooking pots. I think we are on a major tourist trail here and the people don’t seem to register us at all – hardly any children beggars or any attention.

At night we stayed at the brand new bed and breakfast called Tamimanga – “blue clay”. It is owned by Claude and Josee Rakotoson, an older couple. Claude saved a lot of money during his working life and invested it here. It is unusual for big hotels and tourist companies to be owned by a Malagasy, usually they are foreign owned. Za tours is owned by a Malagasy woman and they try to direct their tourists to Malagasy owned operations such as this one. We were the first Za tours customers to stay here and there will be more coming.