“The lush green rainyforest” – that’s how Za Tours described Ranomafana National Park in its itinerary for us and it is indeed that.

We had a great tour this morning with an excellent tour guide – Stephan (French pronunciation). All the tour guides have a “spotter” that goes ahead in the forest to track lemurs etc. and calls the tour guide who then directs the tourists to the hot spot. Ours was Seraphin, Stephan’s nephew. Both spoke great English. Stephan’s English was self taught from tourists. He also knows French and about 8 Malagasy dialects – obviously has a gift for languages! And he also knew a lot about the lemurs and birds.

It was nice to be back hiking though the rainforest – reminded me of home and the weather is cooler and more manageable here. I am starting to get homesick! It was also great to be out of the car and moving our bodies! It was a very energetic hike since it is very hilly here and we were going up and down and all around chasing lemurs.

We were lucky – we saw 5 of the 7 diurnal lemur species – most only see 3 or 4. And the weather also was good. It’s been raining for the last 6 days and today was sunny and warm which probably helped bring the lemurs out since they like to hide in the rain.

Ranomafana means “hot water”- named after a nearby hot spring. It was protected in 1991 and is 41000 hectares. Ranomafana along with five other Eastern rainforests is another UNESCO world heritage site.

Stephan said that there have been issues with the government kicking out the local people from the park. It is his tribe the Tanala. He used to work inside the park helping a “rich man” log rosewood (now illegal in Madagascar) and other trees and also as a gold panner in the streams. He was also a ranger once the park was established. He said rangers only earn 100,000 ariary or 50 dollars a month and rent is 80,000 or 40 dollars. Hmmm – good one Malagasy government! He is now a “freelance” guide.

Like I said – this seems like a good job for him – he’s the best forest guide we’ve had. He’s really enthusiastic about it, running around trying to find Christian the best camera angle. One interesting thing he mentioned is that some species of lemurs are termed “discovered” in a certain year, like one in Ranomofana was “discovered” in the 90s. However, he knew that lemur and had a Malagasy name for it before that time. So discoveries might just be adding a new Latin name to a species that people already know about. 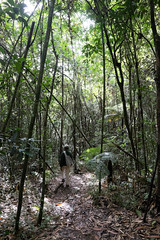 Our guide Stephan and the Ranomafana rainforest. 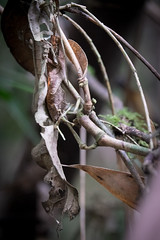 Can you find the leaf tailed gecko? 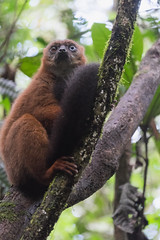 Red bellied lemur with odd blue eye and brown eye combo. Not normal for this species. 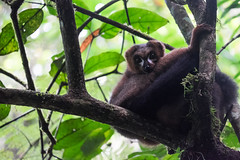 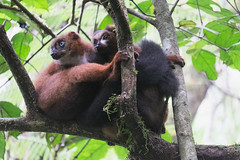 There are actually three red bellied lemurs in this shot! Cuddling fur balls! 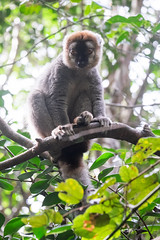 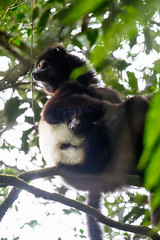 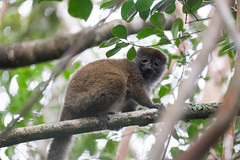 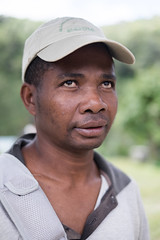 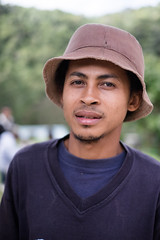 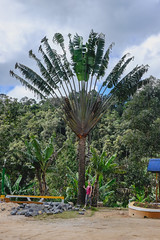 Traveller's palm! At the entrance to Ranomafana. 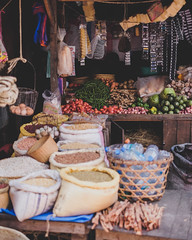 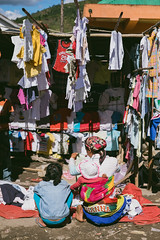 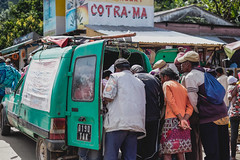 Selling natural medicine from the back of a car. 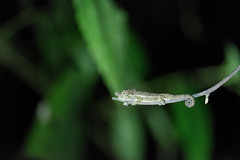 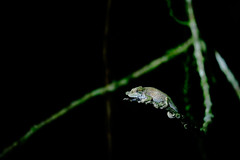 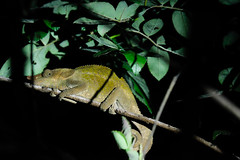 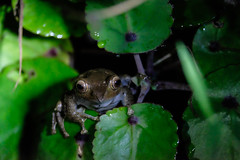 Frog at night in Ranomafana 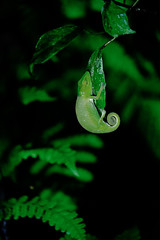 We saw tons of fun stuff! Here is an abbreviated list.

– Red bellied lemur – another family of three. Watched them for a while since they were very close to the ground. Father and son were grooming each other, then the mom came in for another lemur cuddle pile!

– Milne Edwards sifaka – a large impressive looking species. We ended up bushwhacking through some steep terrain to get to this one which was kind of fun! We even picked up a few small leeches in the process (don’t carry diseases). It was worth it since we got up close to a mom and a baby. Aw!

– Ranomafana grey bamboo lemur – a small cutie that makes gurgling noises. The most rare one to see.

Amphibians / reptiles – have a huge number here but many are in hibernation for the winter:

– Leaf tailed gecko – Stephan pointed to a two foot long dried piece of bush and asked us to pick out the gecko. Looked for two minutes and couldn’t see anything despite the small area that we had to look. He then pointed out the gecko that looked exactly like a dried stick and leaf. Best camouflage I’ve seen!

-Tree frog – just heard it. Sounds like a bird. I recorded it!

Insect – just wrote down one particularly cool one:

– Nephila spider – the female is about 100 times larger than the male. We saw both on the same web. When it’s time to mate, she eats him, ending his life!

Birds – not too many! Heard a bunch did not write them down:

– Magpie robin – saw it singing today – like its song.

– Travelers palm – love this one! Air Madagascar uses it as it’s logo. It is a huge palm whose leaves make a gigantic fan at the top. It has many uses. Stephan says that people who have diabetes drink one liter of its water a day to get cured.

– there is one type of Endemic bamboo that grows 17 cm a day. One week’s growth is over a yard!

We saw a bunch of porters walking from the old growth area of the park. The part we were walking in was only 50 years old. To be old growth it should be 200 or 300 years old. I would have liked to see that area but you have to camp there. The porters were all walking barefoot and I commented on it. Stephan said he would be more comfortable if he was barefoot himself – that’s the way he goes when he is at home on his farm. He also told us that his 95 year old father and 88 year old mother are still alive and are still plowing and farming their rice field in the village!

Christian needed some batteries for his “torch” aka flashlight so on our way back we dropped Serraphin in the Ranomafana village and went to the central market to buy batteries. It was bustling as it was a market day there.

One interesting thing we saw was a man on a microphone selling a local medicine product from the back of his truck. It was supposed to heal rashes. He had a crowd of people around and he sounded like a good talker. Apparently it was a cheap price. It reminded me of a snake oil salesman from the old days in America.

Christian bought two AA batteries – the only brand option available from an already open pack of four. They were 50 cents total and lasted about half our night walk later that evening.

Fan pointed out the three different parts of the market, which is typical. One is the grocery area with vendors selling food items in stores or on top of a cloth laid on the ground. The other two areas are new goods and used goods.

Much of the clothing that Malagasy buy is actually good condition second hand stuff from overseas. This reminds me of something I read in a Barbara Kingsolver novel. When people talk about “going green” they talk about changing your buying habits to include things like used goods or not using chemicals in agriculture. But people who are not well off financially are already doing these things – for example here where the Malagasy are buying used by default since they don’t have enough money to buy new, or not using chemicals in their agriculture because perhaps they can’t afford them.

In the afternoon we relaxed a bit and then met Stephen and Serrafin for our third night walk of the trip. No one is allowed in the park at night, so we needed to walk along the side of the road outside the park. This is interesting with the winding road and the bat out of hell Malagasy drivers.

We saw more fun stuff which I will list here:

– Blue legged chameleon – this one was having a fly snack

– Oshinoshe chameleon – not sure if I got the spelling right!

– awesome sounding frogs. Got a recording

Also saw the Southern cross constellation. Definitely do not recognize the stars here!