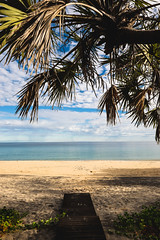 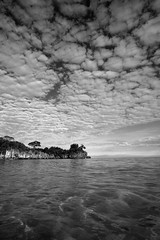 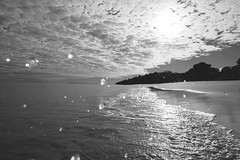 Dip in the water first thing in the morning! 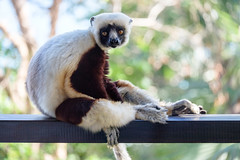 Sittin on his butt outside our room. 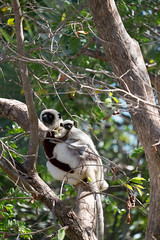 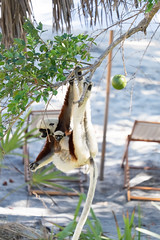 Good way to hang with ur baby. The babies cling on no matter what the mom is doing 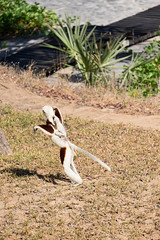 Coquerel sifaka and baby on the move! 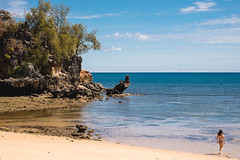 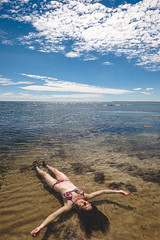 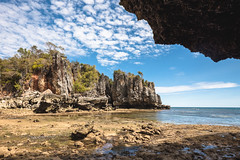 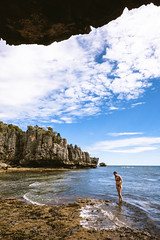 Tide pooling! Each day we explored the wild beach coves of Anjajavy. We arrived just before the high season for French tourism, meaning we had the beaches all to ourselves! 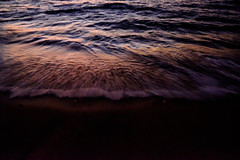 Christian had some fun photo-ing the sunset. 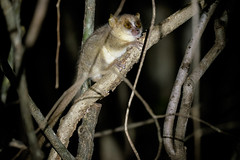 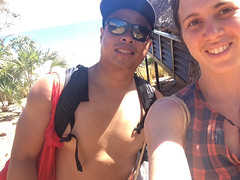 On our way to the beach selfie! (Laura iPhone Photo)

Where we would spend the day. (Laura iPhone Photo) 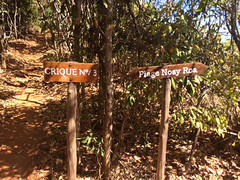 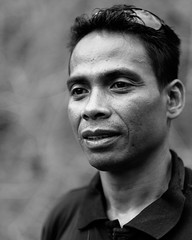 This morning after breakfast we go back to our room to get ready for our day only to find one of the sifaka lemurs perched on his butt on our balcony! Did not care that we were there in the slightest. Christian was able to get within 12 feet of it with his camera and I was about the same watching from behind our glass doors.

It was fun to see one so close up, not moving at all – looked like sitting on his butt must have been a nice position change from always hanging off a tree.

After we had watched him for a while and were about to go, a few other lemurs hopped up! This was the “band of 4” that Barney had told us about and one of them indeed had a baby with her! I had hoping we were going to be able to see the baby before we left Anjajavy. So cute!! The baby just clings on and goes wherever the mother goes. This one alternated between clinging to her back and her front.

After they finally hopped away, we got ready to go snorkeling on beach number 3, Plage Nosy Roa, “two island beach”. Another beautiful deserted beach!! The tide was super low when we got there so we did a bit of tide pooling instead of snorkeling. Saw a cool sea cave full of white old coral pieces, some small colorful fish, a funny looking sea slug, some spiny starfish and a lot of brainy looking sea things – don’t know what kind of animal they are – coral I guess.

Relaxed a bit and then when the tide came in we finally did some snorkeling but we only lasted about 10 minutes. I have a weird fear of sea animals sometimes and Christian got a bit motion sick. Oh well – not the sport for us!

We also saw a couple of local fisherman out a ways. One had flippers and was diving around the boat. I couldn’t tell what he was up to – setting a trap?

In the afternoon we took advantage of the free massage that came with our honeymoon package!

Finally, we took a night walk tonight with a guide named Rado. Basically we walked along a trail with giant flashlights, shining them into trees hoping to stun one of the local nocturnal lemurs into standing still for a second. He says he alternates his route so as to not always bother the same lemurs.

The nocturnal lemurs here are a lot smaller than the ones awake during the day. We saw two mouse lemur species – the gray and the golden-brown mouse lemurs. One mouse lemur species, the Madame Berthe’s mouse lemur is the smallest known primate in the world coming in at 9 centimeters long. The golden brown one we saw is huge – a whole 13 centimeters! They move around in the trees half like mice and half like hopping lemurs.

When we got back to the hotel we caught a little more background on lemurs from Barney: there are over 100 known lemur species, all only in Madagascar. There are also about 40 extinct giant lemurs, probably hunted to extinction by the first Malagasy settlers like the giant Moa in New Zealand. The pictures of the giant lemurs in the lemur book are really fun – one looks like a giant dog panda warthog.