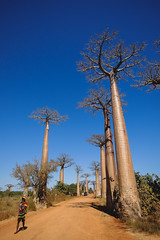 Our first visit to the Avenue of the Baobabs. 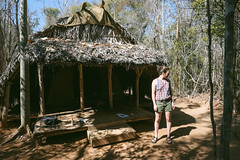 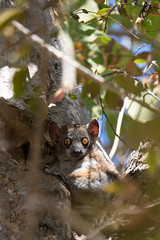 Red tailed sportive lemur - hope we didn't wake him up! 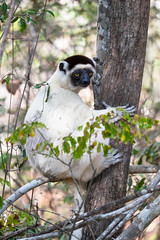 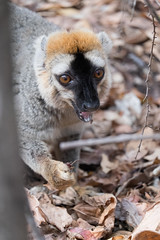 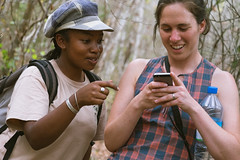 Claudia and Laura compare naturalist iphone apps - she has a lemur app and I have iBird! 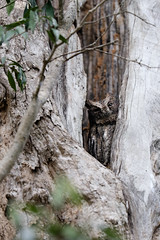 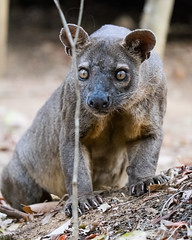 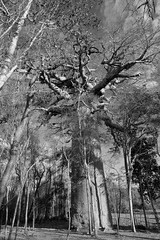 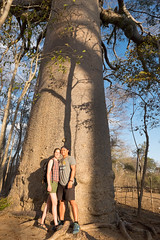 Posing in front of the sacred baobab - Madagascar July, 2104

Got up at 5 AM to go catch a flight to Morandava, the Western coast of Madagaacar again, but much farther South than Anjajavy. We said goodbye again to Jackie at the airport.

Claudia, our new Za Tours tour guide picked us up at the airport. She is based out of Tana, but the driver, Rivu, is from Morandava. It’s a good thing too because we were on pavement for a little bit, but the road turned almost instantly to a mix of dry mud and deep sand. Our car is pretty burly – a Mitsubishi Pajero with tall wheels and 4WD – but Rivu is able to navigate this terrain confidently and quickly!

On the way, Claudia told us stories while Christian snapped lots of photos of baobabs. They are the only trees left standing around the acres and acres of rice fields (since they are sacred to the Malagasy). These fields feed Tana and other areas of Madagascar.

Claudia is a wonderful guide because she is excited about tourism and seeing her own country and sharing it with us. She enjoys explaining to us the many many customs and beliefs. She liked facilitating meetings between us and the people we meet along the way. She talks about wanting to do certain drives and explore certain areas as a guide. She was saying how they recently made an IMAX movie called the lemurs of Madagascar, narrated by Morgan Freeman of course, that she wishes she could see but they are not showing it in Madagascar and they don’t have an IMAX anyway. Also she is 28 years old and feels like she could be one of our friends!

The area we are in is called Bena Be, or “big red” because of all the red earth everywhere. We are also back among the Sakalava ethnic group which is one of the biggest in Madagascar.

On one of our stops, Claudia pointed out a Sakalava custom. A woman who is single and looking for a man puts a silver cap on one of the teeth you can see when you smile. When she smiles at a man, he will know she is single. When she gets married, her husband gives her more silver and gold caps. That way when she smiles, people know she is taken.

We reached the place we would be spending the night – Camp Amoureux or “lover’s camp”. It’s named after a big twisting baobab tree in the center that looks like an intertwining couple.

It is a super rustic place – our bed was a big tent on a shaded platform. No electricity and a version of running water that was buckets on platforms trickling down to sinks and showers etc.

Camp Amoureux is another example of eco tourism started by an NGO called Fanamby. Their goal is to bring some tourist dollars to the local economy through hiring local guides, cooks etc to work at the camp. This helps local people have another source of income so they do not have to cut down the dry forest habitat that the area is famous for.

Almost immediately we saw some lemurs – Verreaux’s sifaka – looking similar to the Anjajavy sifakas we saw and the normally nocturnal Red tailed sportive lemur. Christian had some fun photographing that one.

We settled in and had a delicious lunch. We chatted with Claudia. She studied tourism in college. She has two younger sisters and lives with her parents in Tana. She is from the Merina ethnic group but only observes some of the traditions. One is the famadihana, or “turning of the bones”, where every few years they take dead relatives out of their tombs and re-wrap the bones, making a family celebration about it. Another is a long and complicated sounding marriage proposal tradition, where the man has to gather the two families together and make an hour long speech among other things.

In the afternoon we visited the Kirindy forest. Our guide was Gervos, an energetic funny young guy. We saw another new species of lemur called the Red fronted brown lemur – again quite similar to the common brown lemur we saw at Anjajavy. Saw a tropical looking bird called the Crested coua – big white guy with a fun blue head and a crest. We also saw a sleepy Scop’s owl. So cute!

One animal we did not see – and I don’t mind actually – is the “giant jumping rat” – a species that only lives in Kirindy forest! It’s three times bigger than the other jumping rats in Madagascar. We did see their burrows.

Most of the walk was pointing out different trees and plants, explaining their many uses and traditions. Highlights included the Tsiani posa which means “Fossa can’t climb”. It’s got spiky knobs on it. The fossa is a cat type animal that is Madagascar’s biggest predator. Lemurs and other animals escape fossas by climbing this tree.

We also saw a Mpanjaka Ben ny Tany or “the biggest king of the Earth tree”. In Claudia’s tradition, if you cut a piece of it when you are older, and keep it in your home, it will bring you luck. But if you cut it when you are young and not wise, it will bring you bad luck. Gervos already has a piece even though he is not old. His tradition doesn’t have the age condition.

Christian was talking about fossas the whole tour, making jokes that this noise was one. He really wanted to see one but we knew however that even though the Kirindy forest has a large amount of fossas it was highly unlikely to see one since they are secretive and have large territories. Many guides don’t even see them. We were surprised when we asked Gervos when the last time he saw one was and he told us last night when three came by the camp kitchen they have and this morning when one was rummaging in their trash heap. This means the guides are not managing their food waste correctly and the fossas are becoming used to finding food at the Kirindy camp! This is not a good “keep animals wild” practice and plus it is dangerous since the fossa could attack someone eventually. I told them they should cover their trash heap.

Most disturbing however was when we got back to camp and Gervos asked the other guides a question and announced that he knew where a fossa was – under bungalow number four! We went over to the bungalow and sure enough, there was the fossa, shading himself under the bungalow. What’s worse is that Gervos brought over some chicken to throw on the ground outside the bungalow so the fossa would come out to eat it and we could get a good picture. I held my tongue but this is not an ethical way to treat wild life. I am sure most of the tourists don’t care – they like that they get pictures of the fossas.

On the way back we stopped by the sacred baobab tree which is one of the biggest baobabs in the area. It’s fenced off from the nearby village. There is another baobab tree in that village which is equally as large. I asked why that baobab is not sacred and it all started when some sick people asked the sacred baobab to be well and they got better, “proving” it has powers.

The sacred baobab had some leftover rum at its base. This is something you use for a sacrifice if you want strength since it is strong. You use a sweet sacrifice item if you want something sweet. Basically you are sharing with your ancestors. I asked Claudia if she ever does sacrifices and she says she does but small ones like candy. She says if you want to ask something big you have to use something big like a zebu.

This village and many of the villages we would see along our route in the hot dry countryside was particularly poor. Some of the children had big bellies which I understand as malnourishment. In other villages there were some children that were way too skinny. This is really hard to see. Claudia explains that one factor contributing to the poverty is access to water. They need to work hard and walk far just to fetch water. They don’t move closer because their ancestors lived there, and their land is there.

Back at camp, we witnessed a water delivery by the local boys via zebu cart. That’s always a sight to see for an American but super commonplace for them.

After sundown, we were paired up with a local guide, Velo, so we could go on a night walk. He was a pretty quiet guy and had on clothes that were too big for him. The night walk was similar to the other one we went on – shining flashlights into the trees looking for shining eyes. Christian got really good at this, and spotted five lemurs before Velo.

Among other things, we saw a fork marked lemur and a small boa constrictor. We also saw the smallest primate in the world – the Madame Berthe’s mouse lemur!