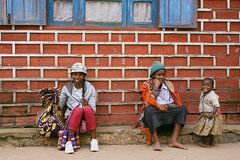 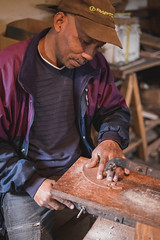 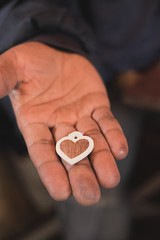 When Narcisse found out we were honeymooners he inlayed a heart pendant for us! 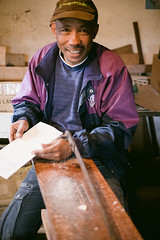 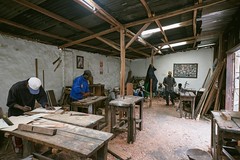 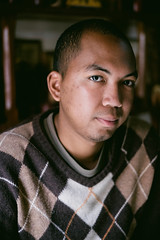 Fan - our tour guide for the second half of the trip. 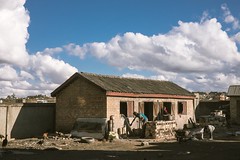 Building where metal pots are made. 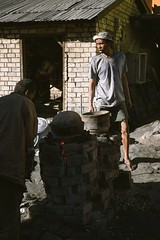 Waiting for the molten metal. 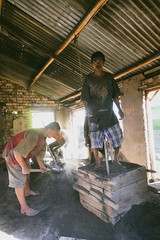 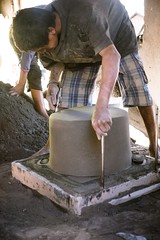 Hand shaping the cooking pot form out of volcanic sand. 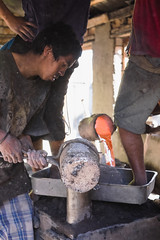 Two men stand on the form barefoot, while the other man pours molten aluminum. 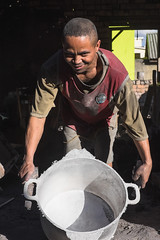 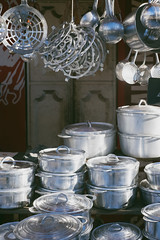 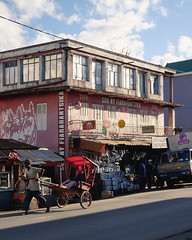 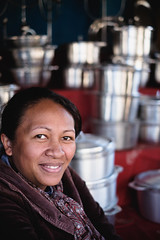 We bought a cooking pot at this store. 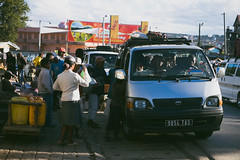 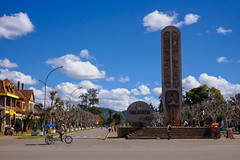 Stopping for lunch at Independence Ave. in Antsirabe. A monument memorializing the 18 tribes of Madagascar 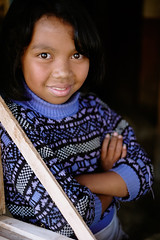 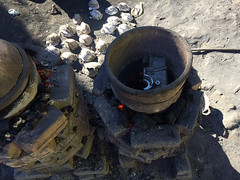 Metal from an engine being melted down to make a cooking pot. (Laura iPhone photo)

In the morning we visited a super interesting wood shop to get a demo of the local wood inlay method by a man named Narcisse. From the quality and intricacy of the pieces that were produced there, you would never guess how simple their equipment is. There was not even a name for the saw contraption which is hand operated and completely homemade. Also the blade is a recycled piece of metal from the inside of a tire! Narcisse made us a heart pendant in honor of our honeymoon 🙂

We did some gift / souvenir shopping after that and were then on our way back in the car on the windy roads. This tour was slightly ill planned (due to planning the wedding instead!) in that we had a bit too much driving time and not quite enough on the ground sightseeing and relaxing time.

The afternoon stop was to witness another fabrication process in a town famous for making the country’s cooking pots: Ambatolampy.

It was again very impressive what was accomplished with little material sophistication. The working conditions left a bit to be desired however!

There were about six men working in a practiced dance on one pot at a time. They were all barefoot! One man was in charge of boiling the aluminum over a regular fireplace out in the open air. One pot held an old engine part that they were boiling down to reuse. The men were always careful to save any bits of aluminum that would go astray during the process.

The other men were working on the forms which they make out of a volcanic sand located 15 kms from the town. I can’t explain the whole thing but they make the sand form very carefully, even shaping the bottom by hand. Then they pour the boiling hot aluminum in, inches from the bare feet of two of the men who are standing on top of the form to keep it tight! After it cools, the pot goes to a polishing and shaving area which I could barely look into – it looked like such dark and dirty conditions. However, the Malagasy spirit showed thru as one of the men proudly showed off one of the pots for Christian.

The rough form of the pot (pre-polishing) with the lid took 6 men about twenty minutes. It would be sold for 25 dollars.

Besides eating and packing up to go that was mostly the extent of our day. We found out Fan has a girlfriend and is saving up to pay for the marriage in a few years and to move into some property that his dad owns. Marriage includes paying each of her 8 brothers cash – it’s a tradition!

On the way to our night time flight from the Tana airport we passed a circumcision party. Fan said that almost all the tribes practice circumcision around the age of three and one of the traditions is that the grandpa needs to eat the foreskin raw! He usually puts it in a banana and then chows down. It’s a sacred part of the body and should not be thrown away Fan says!

Sent from my iPad by My Vacation HD app (www.myvacationapp.com)